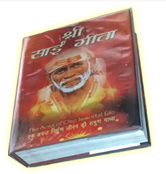 Humble salutation to our Beloved Gurudev Sri Anand Sai, our beloved Papa, our Refuge, our saviour.
Guru is Brahma, He is Vishnu and Maheshwara. All three the Creator, the Sustainer and the Destroyer of the Universe merge together in the physical form of the Preceptor. Lord Sri Dattatreya is the Adi - Guru. The Divine Path advocated in different eras by the different physical forms of the Adi- Guru contain the same unblemished truths. The path shown by the different forms remains the same but the approach changes as per prevailing conditions.

Our holy scriptures pronounce emphatically the requirement of a guide to attain the supreme goal as the road which leads to Nirvana is lined with deep potholes, diversions, subway and glittering attractions. The Preceptor Himself is the supreme goal. In Him are enshrined the Divine virtues of integrity, truth, compassion and infinite love.

The magnetic aura of the Preceptor tugs at the souls He selects. His merciful gaze opens for the devotee the doorway to spiritual living. Blessed are the earthly sojourns of those who are accepted by the Satguru.
In Kaliyuga, it is Ultimate Grace of the Supreme Power to be baptised by a Satguru. The Grace of the Satguru is most sublime and it works miracles in a devotees life. He transforms the life of His devotees. We are amongst the very few lucky ones who were bestowed by the Divine Grace of Satguru Sri Anand Sai Ji. Each of Sri Anand Sai Ji's children can vouch for the protection and guidence they have received. He saved His children from deep trenches, pot holes and distracting gliters. He has taken upon Himself innumerable times, His devotee's physical afflictions. He was and is our Beloved Mother. He always reiterated - Karmas are the stepping stones to spiritual progress and must be borne gracefully. We are humbly ever indebted to our heart throb, our beloved, our all in all Gurudev Sri Anand Sai Ji.

Our Satguru Sri Anand Sai ji was born at midnight on 16th January 1919 in Chakwal, District Jhelum, West Punjab (now in Pakistan ) . His birthdate and time coincides with that of Sri Guru Govind Singh Ji, the tenth Sikh Guru. His father Sri Bhagat Beliramji and mother Subhadra Deviji were very pious souls. The child was aptly named MANOHAR - one who captivates the heart. From an early age He was particularly found of listening to stories of Gods and saints and loved holy pictures displayed in His house. Many saints graced this household from time to time. At the age of eleven years, child Manohar was initiated by Baba Sai Nath who came to that village in the form of wandering mendicant. For fourteen days, the regal, safforon attired sage stayed at Santpura in Chakwal, baptized the blessed child with holy mantra and introduced Him to meditation to lead a God centered life.

The Supreme Master Baba Sai Nath alone knew the significance of this spiritual nurturing, the purpose of His Amrit Putra's sojourn on earth. The twinkles of shining days ahead can be seen in the young Manohar. Sri ji Manohar matriculated from a local school in Chakwal with flying colors. His graduation and post graduation was from the then prestigious Government College , Lahore . In 1941 younger brother Jagmohan and He began to work together. In 1942 Sri Ji was married to beautiful Yash, daughter of Shri Mangal Sain Kanpur. They were blessed with two children, daughter Suman and son Jayant.
In 1947, during partition the entire family migrated to India . Sri Ji Manhor initially stayed at Jaipur with younger brother Shri Jagmohan later He shifted to Nagpur and worked as civil contractor. In 1953 Sri Ji Manohar was escorted to Sri Swami Sitaramdas Ji Maharaj by Shri Mudliar Babu .

Swamiji and Sri Ji first met at Shri Lanjewar's ancestrial home. He received His second initiation from this revered Guru. Swamiji's intimation for Sri Ji Manohar had no bounds. Sri ji become Swami ji's beloved disciple and was lovingly called 'MUNNU'. They used to sit together for hours in closed room. In Sri Swami ji's association, Sri ji's latent spiritual tendencies came to the fore, Sri Swami Sitaramdas ji Maharaj left His physical form on 20 th August, 1969.
Sri ji Manohar had His base in Baba Sai Nath of Shirdi . Baba become the focus of His veneration. He saw Baba in every form of God. His love for Baba was so immense that at times He was unable to bear His separation . He would pray to Baba for a glimpse and if not fulfilled He used to bang His against the wall and cry like a child to have glimpse of His Mother Sai. When the urge is immense, love is so ture than how can Sai Maa stay back . Baba took physical form several time to meet His Amrit Putra Sri ji Manohar. Before leaving His physical form Sri Swami Sitaramds ji Mahraj bestowed Gurutatva on Sri ji Manohar on 19 th August 1969.

Though the Gurutatva was bestowed He was reluctant to come out open as Satguru. Sri Swamiji Himself had commanded His followers to see Him in MUNNU after He left His physical form. In October, 1970 Sri ji Manohar's devoted wife, Yash passed away after brief illness on the wedding day of their son Jayant. He faced this loss with equanimity and no complaints. Now He devoted all His energies towards His Beloved Sai Maa. Baba Sai Nath persuade His Amrit Putra and Gurutatva started working thought Him. Morning and evening prayers were held regularly at His residence from 2 nd August 1971. People started approaching Him for initiation. He said do not rush for initiation. First understand the path and gauge your sincerity. Then come to Me for initiation. He initiated very few selected souls. He never ventured out in public , never took a penny from any of His devotes. His devotees loving called Him PAPA.

On 28 th January, 1973 Baba Sai Nath renamed His Child as Sri Anand Sai. Ananda the Child in Sai the Mother. Nishkam Bhakti, True love for Baba, Honest earnings, Simple living and child like nature are the core essence of His Divine practical teachings. Sri Anand Sai ji urged His disciples to surrender their ego to Baba Sai Nath. He insisted more on ones life rather than performing physical sadhnas. He devoted all His action and deeds to Baba Sai Nath. He was sent to this earth by His Sai Maa to set an example for the world to see and follow as to how can one attain the ultimate even while performing one's worldly duties. He lived in what He preached. He penned number of holy books. Sri Guru Leela Amrit , a poetic biography of Sri Swami Sitramdas ji Maharaj is a blissful narration. Over the years a bouquet of soul stirring hymns were written and have been complied in over a hundred publications. He is the founder of Sai Publication. Sri Sai Geeta penned by Baba Sai Nath through His Amrit Putra Sri Anand Sai is guiding numerous souls in attaining the Nirvana . Beloved Papa, Sai Amrit Putra Sri Anand Sai ji left His physical form on 15 th November 1994.